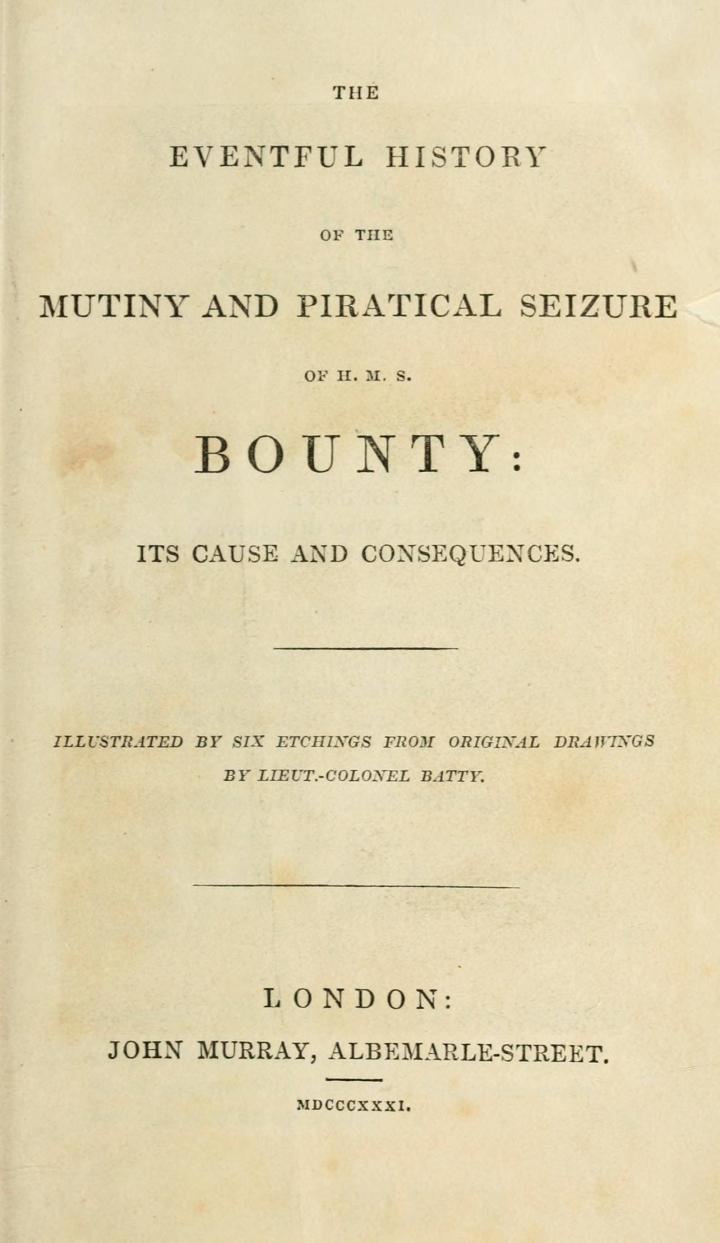 The eventful history of the mutiny and piratical seizure of H. M. S. Bounty, its causes and consequences (1831)

Titre : The eventful history of the mutiny and piratical seizure of H. M. S. Bounty, its causes and consequences
Auteur : Sir John Barrow (1764-1848)
Éditeur : John Murray – Londres
Date : 1831
Sujet :
Chapter I. OTAHEITE. Brief description of Otaheite, as it was at the time of its first discovery by Captain Wallis, and then subsequently visited by Captain Cook . 1
Chapter II. THE BREAD-FRUIT. Expedition of the Bounty, commanded by Lieutenant Bligh to convey the Bread-Fruit Tree from Otaheite to the West India Islands .40
Chapter III. THE MUTINY. Lieutenant Bligh’s Narrative of the Mutiny and Piratical Seizure of the Bounty by Mr. Fletcher Christian and part of the Crew, with Observations there on .61
Chapter IV. THE OPEN-BOAT NAVIGATION. Narrative of the unparalleled voyage of Four Thousand Miles, performed by Lieutenant Bligh and seven- teen others in an open Boat . 95
Chapter V. THE PANDORA. Narrative of the Expedition of H.M.S. Pandora in search of the Mutineers; of the treatment of those taken on board that ship ; and of her destruction by crossing the barrier reef off the coast of New South Wales . 148
Chapter VI. THE COURT-MARTIAL. Abstract of the proceedings of the Court-Martial held on the Mutineers, and the Sentence passed on them . 205 Chapter VII. THE KING’S WARRANT. The King’s Warrant for the Pardon of those recommended by the Court to his Majesty’s mercy, and for the Execution of those condemned . 245
Chapter VIII. THE LAST OF THE MUTINEERS. The Last of the Mutineers discovered with their off-spring on Pitcairn’s Island; the history and fate of those who carried off the Bounty, and the present state and condition of their innocent off- spring . 282
Type : Monographie imprimée
Langue : Anglais
Identifiant : eventfulhistoryo00barr – ark:/13960/t2k64qc19
Source : University of California Libraries
Agrégateur : archive.org
Lien : https://archive.org/details/eventfulhistoryo00barr