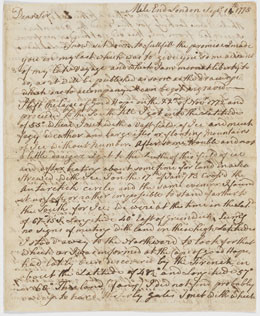 I now sit down to fullfill the promise I made you in my last, which was to give you some account of my late voyage and which I am more at liberty to do, as it will be published as soon as the drawings which are to accompany it can be got engraved.

I left the Cape of Good Hope on the 22nd. Novr. 1772 and proceeded to the South till I got into the Latitude of 55° where I met with a vast field of ice and much fogy weather and large isles or floating mountains of ice without number. After some trouble and not a little danger, I got to the South of this field of ice and after beating about some time for land in a sea strewed with ice, I on the 17th. of Jany. 73 cross’d the Antarctick circle and the same evening I found it unsafe, or rather impossible to stand farther to the South for ice; we were at this time in the Latitude of 67.15 S. Longitude 40°. east of Greenwich. Seeing no signs of meeting with land in these high Latitudes I stood away to the Northward to look for that which, as I was informed at the Cape of Good Hope, had lately been discover’d by the French, in about the Latitude of 48½° and longitude 57° or 60°. This land (if any) I did not find, probably owing to hard westerly gales I met with which might carry me something to the East of its situation. While I was looking for this land the Adventure was separated from me, this did not hinder me from proceeding again to the South to the Latitude of 61° and 62° which was as far as the ice and prudence would allow me. I kept between this latitude and 58° without seeing any signs of land, till I thought proper to steer for N. Zealand where I anchored in Dusky Bay on the 26th of March. This Bay lies on the S.W. point of N. Zealand and abounds with fish and Wild Fowl, on which we refreshed for near seven weeks and then sailed to Queen Charlotte Sound where I found the Adventure and who had been here six weeks.

Oct. 19th. we anchored the third time in Queen Charlottes Sound in New Zealand, where we remained three weeks. The inhabitants of this place gave us some account of some strangers having been killed by them, but we did not under-stand they were part of our consort crew till we arrived at the Cape of Good Hope. That the New Zealanders are Cannibals will no longer be disputed, not only from the melancholy fate of the Adventures people and Captain Merion and his fellow sufferers, but from what I and my whole crew have seen with our eyes. Nevertheless I think them a good sort of people, at least I have always found good treatment amongst them.

After leaving New Zealand I steered directly for Cape Horn, I put in at Terra del Fuego and Staten Land where we met with little worthy of note. On my passage from the last mentioned land to the Cape of Good Hope, I fell in with an isle of about 70 leagues in circuit and situated between the latitude of 54 and 55, which was wholy covered with snow and ice; again in the latitude of 59 I met with more land, the Southern extend of I did not find, so that I was not able to determine whether it was compos ed of isles or was a part of a large land, some parts of it shewed a surface composed of lofty mountains whose summits were lost in the clouds and every where covered with snow down to the very wash of the sea, notwithstanding this was the very height of summer, or rather toward the Autumn when the weather is warmest in the Southern Seas; we also met with a great deal of ice in the sea, both isles and drift ice. After leaving this land I sought in vain for Cape Circumcision and on the 22nd. of March arrived at the Cape of Good Hope, in great want of both stores and provisions, fresh provisions especially which we had not tasted for a long time, except it was sea fowl, seals etc. I left the Cape on the 27th. of Apl. touched at St. Helena, Ascension and Fayal and arrived at Spithead the 30th. of July, having only lost four men from the time of my leaving England, two was drowned, one killed by a fall and one died of the dropsy and a complication of other disorders without the least mixture of the survy. This Sir, is an imperfect outline of my voyage, which I hope you will excuse, as the multiplicity of business I have now on my hands will not admit of my being more particular or accurate. Any thing further you may want to know, you will always find me ready to communicate it. I did expect and was in hopes that I had put an end to all voyages of this kind to the Pacific Ocean, as we are now sure that no Southern Continent exists there, unless so near the Pole that the Coast cannot be navigated for ice and therefore not worth the discovery; but the sending home Omiah will occasion another voyage which I expect will soon be undertaken.

Mrs. Cook joins me in best respects to you and all your family, and believe me to be with great esteem,

Yours most sincerely
James Cook.

P.S. My compliments to Mr. Ellerton if he is yet living.